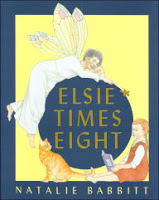 Elsie Times Eight by Natalie Babbitt. Elsie’s fairy godmother loved her very much. She came by frequently to see how she was doing. One day Elsie’s mama was telling the fairy godmother that Elsie didn’t always do some of the things she did before. Her fairy godmother thought she heard her say “Elsie should be four,” instead of “before.” Well that started it. Godmother thought to herself “Dear me! Still, I guess I could do it.” She waved her wand and turned Elsie into four! Four Elsies that is. And each time someone in Elsie’s family said “NO Wait!” Godmother would hear a number: Eight, and she waived her wand again turning her into eight Elsies! This caused all kinds of trouble. There was only one bed, and too much noise, nervous goats, and annoyed neighbors. Finally the Mayor complained, and they had to move away. No town wanted them to stay. The Elsies were too noisy. Finally the fairy godmother saw them while sitting in a tree and asked, “Why are you moving?” Her family explained, and the fairy godmother promised to change Elsie back to one. As soon as she figured out which Elsie was the first Elsie… See this book listed in our catalog