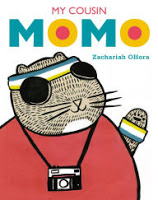 My Cousin Momo by Zachariah O’Hora. Momo is kinda odd. He’s a flying squirrel that is too shy to fly in front of people. He wears weird clothes (red sweaters with weird sweatbands?!) and doesn’t play games like all of the other squirrels do. He’s from the city, so he does things a little differently, but still… weird is weird. At first his cousins are totally excited to hang out with Momo (I mean, he’s a flying squirrel! How cool is that!?), but after a while they decide that he’s not cool at all. But maybe, juuuust maybe, Momo is a little cool, just a different kind of cool from the rest of us. My Cousin Momo is a story all about how even though a person may look or act differently from yourself, that isn’t necessarily a bad thing. They might just be doing their own thing, and that’s kinda the coolest thing a person can do. See this book listed in our catalog