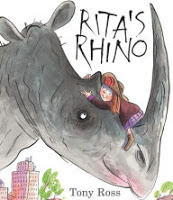 Rita’s Rhino by Tony Ross is a story about pet ownership and knowing when you are ready. Rita wants a pet very badly but her mom isn’t allowing it. That is, until she finally agrees to small pet, and Rita isn’t happy with a small pet. She wants something just right… a Rhino! Rita sneaks a rhino out of the zoo and into her tiny city apartment. Rita didn’t realize hiding a humongous rhino in a tiny apartment would be so difficult. Having the responsibility of taking care of her pet rhino proves to be too much for Rita and Rhino. Rhino misses his comfy bed and doesn’t like riding in elevators, and Rita doesn’t like hiding Rhino’s huge poop and feeding him his special and expensive African grass. Rhino returns to his zoo home and Rita and Rhino sneak away for small vacations to still spend time together. See this book listed in our catalog