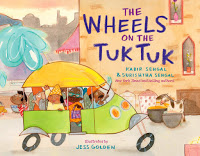 The Wheels on the Tuk Tuk by Kabir Sehgal and Surishtha Seghal, illustrated by Jess Golden. You probably know all the words to “The Wheels on the Bus” by heart, but what about the wheels on the Tuk Tuk? In big cities in India, tuk tuks (pronounced “Took Took”), also called motor rickshaws, are a common way to get around. This story in song follows one tuk tuk on its route. All sorts of people hop on and off, paying their fares with rupee coins as the three-wheeled vehicle zips up and down crowded streets, through markets full of vegetables, and past food shops selling tea and treats. The tuk-tuk-walla (the driver) makes his way carefully around cows sleeping in the road, dodges an elephant, and sees the festival fireworks of the Diwali holiday before finally parking his tuk tuk at home for the night. The bright, cartoonish illustrations are filled with details of life in a busy Indian city, and a glossary defines unfamiliar words. See this book listed in our catalog