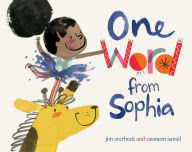 One Word from Sophia by Jim Averbeck and Yasmeen Ismail. Sophia’s birthday is coming soon, and she really wants a giraffe. A real giraffe. Sophia really, really wants a real giraffe. But to get one, she’ll have to convince the four grown-ups in her house: Mother, Father, Uncle Conrad, and Grand-Mamá. Sophia carefully crafts a plea to each adult: with Mother (a judge), she makes a legal argument. To Father (a businessman), she presents the financial benefits of giraffe ownership. To convince Uncle Conrad (a politician), she shows him the highly favorable poll results for giraffes. With strict Grand-Mamá, she tries a good old-fashioned buttering-up job. Poor Sophie’s attempts to convince her elders of the advantages of giraffe ownership all flop–her pleas are just too verbose, effusive, loquacious, and failed to get to the point. In short, Sophia is using too many words. Our would-be giraffe-keeper is not a quitter, though, so it’s back to the drawing board to find just the perfect word that will win her a real giraffe. Will Sophia’s giant quadrupedal dreams come true this birthday? You’ll have to read to find out! See this book listed in our catalog