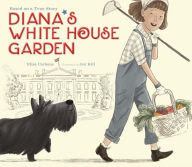 Diana’s White House Garden by Elisa Carbone and illustrated by Jen Hill. Diana who is ten years old lives in the “white house.” Her dad Harry Hopkins was the president’s chief adviser in 1943. She lived there with lots of other people that worked there including President Roosevelt and his wife Eleanor. President Roosevelt wanted every citizen to help with the war effort. When he asked that everyone plant a garden to grow food for our soldiers, Diana wanted to help too. The gardens were called “Victory Gardens.” Diana worked with George the grounds keeper to turn the soil, fertilize, and plant the seeds. She went every day before and after school to tend the garden. When the plants were almost grown reporters came to see it. They asked Diana “how does it feel to inspire the whole country and help with the war effort?” “It feels very good,” she said. An article went out a few days later and the headline read “Diana Farms Her White House Plot”. It explained how the president’s plan was working and how she was an important part! See this book listed in our catalog