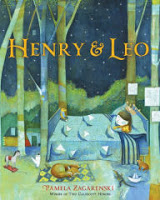 Henry & Leo by Pamela Zagarenski. Leo the lion was Henry’s best friend. Leo had movable parts and glass button eyes which made him look like he knew important things. To Henry Leo is real. One day Henry’s Papa took the whole family on a walk in the woods. “Hurray!” said Henry. “Leo loves walks in the woods.” “Leo is a stuffed toy not real.” Said his sister. But Henry knew he was. The family walked a long time and then Papa carried Henry back because he was tired. At bedtime Henry realized something was wrong. “Papa where is Leo?” He asked. The whole family searched but Leo was lost. They would have to wait till the morning to search for him. That night something magical happened. The woodland animals came to help Leo and bring him home to Henry’s house. The next morning Henry shouted “Leo! You found home!” He was back. His family said they had looked in that very spot and he wasn’t there last night. Henry and Leo are special friends. See this book listed in our catalog