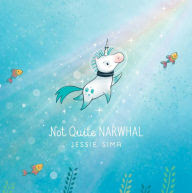 Not Quite Narwhal by Jessie Sima is about a creature named Kelp. Kelp was born in the ocean. He lives there with his friends, the narwhals. He really thinks he is a narwhal. He just thinks he is a little different. His tusk isn’t as long, he doesn’t like the same food that they do, and he is not a very good swimmer, but his friends don’t seem to mind. One day he gets swept away in a current. He sees land, and a creature that looks very much like him. As he goes exploring he finds these creatures and soon discovers he is not a narwhal after all. He is a unicorn. His new unicorn friends teach him all about being a unicorn. He was having lots of fun but he began to miss his old friends so he returns to the ocean. He begins to wonder what he should do. Should he stay with his old friends or return to his new friends? Then he realizes maybe he doesn’t have to choose after all… See this book listed in our catalog