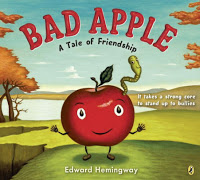 Bad Apple: A Tale of Friendship by Edward Hemingway. Do you love to play in the dirt, fly kites, and go swimming? So do Mac and Will! Mac is a good apple and Will the worm is his new best friend. Ever since they met, they have had a great time playing together and reading stories. They even finish each other’s sentences! Mac and Will have the best day ever until they run into the other apples in the orchard. The other apples bully Mac and call him a bad apple because his friend is a worm. Defeated, Will decides that maybe Mac would be happier without him and he leaves. Fortunately, Mac doesn’t let those bullies get in in between him and his best friend and he searches high and low until he finds Will. This is a charming story of an unlikely pair who let nothing stand between their friendship. See this book listed in our catalog