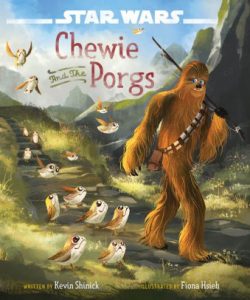 “A long time ago in a galaxy far, far away…” begins Chewie and the Porgs by Kevin Shinick, with pictures by Fiona Hsieh, a story about some of our old and new favorite Star Wars characters! On a remote island, on a remote planet, Ahch-To, lives Luke Skywalker, last of the Jedi Knights, but this isn’t a story about him! This is a story about porgs, native creatures who live a peaceful existence until a spaceship, the Millenium Falcon, arrives, carrying a girl, Rey, a droid, R2-D2, and a Wookiee, Chewie. The porgs are most interested in Chewie, and follow him around the island as he looks for food. Chewie tries fishing, but the porgs eat all the grubs he found for bait! Then when he gets back to the ship, he finds the porgs having a party! Chewie remembers he has some snacks on the ship, but the porgs eat those too! Chewie is furious until he realizes: they landed right on the porgs’ nest, crushing their supply of food for the winter! No wonder they won’t leave him alone. Good thing Chewie has a plan to make things right, and fill everyone’s bellies. Chewie, R2, and Rey arrived on Ahch-To with questions. They leave with some answers, and some delightful new friends, the porgs! See this book listed in our catalog