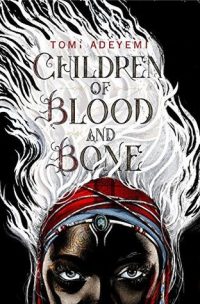 Children of Blood and Bone by Tomi Adeyemi

Who’s it for: Teens

Children of Blood and Bone by Tomi Adeyemi is a sweeping fantasy set in the land of Orisha. The story is told from three perspectives; Zelie, Amari and Inan. There are ten different magi clans, or magic users, all with unique skillsets and abilities. This is a world were magic has been stolen and maji clans are feared, hated and oppressed.

After wiping out the older generation of maji, The king of Orisha allowed child maji to live but sealed their magic away. Now they only have enslavement or poverty to look forward to. We meet Zelie of the Iku clan at the very start in a scene that paints a perfect picture of who the main character is; fighter, determined, fearless. Amari is Zelie’s opposite in so many ways, yet Tomi Adeyemi did a wonderful job of building a unique and unlikely bond between the two girls that is endearing and strong. Inan struggles to gain the approval and acceptance of his father, the king but finds himself torn with wanting to protect his sister and then later, himself. These characters lives become enmeshed in unexpected ways as their journey forces them to face issues of loss, loyalty discrimination, tyranny, acceptance and love. Find it in the catalog.