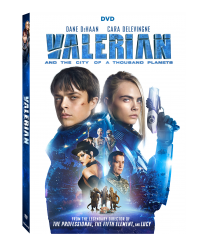 “An adventure film from Luc Besson, the director of The Professional, The Fifth Element and Lucy, based on the French comic book series by J.C. Mézières.  It is the 28th century, Alpha is the space-traveling city inhabited by millions of species from thousands of planets. Valerian (Dane DeHaan) and Laureline (Cara Delevingne) are special operatives that are part of the force that maintain order in this universe.  It is nonstop action as the two complete one mission after another.  One mission is special and assigned to them by the Minster of Defense himself. Enjoy the ride as they race to solve the mysterious force that is threatening the city of Alpha.”  -IMDb

I picked this up because of the cover. I like space operas and I really liked the other films Luc Besson had directed. The visuals were just as stunning as The Fifth Element but the story was not as engaging. I did enjoy it but if I could have stopped comparing it to The Fifth Element, I would have enjoyed it even more. It was a fun action movie with simple missions that go sideways so chaos ensues. The 2 main characters had that great chemistry of being in love but still annoyed with each other. There was a lil bit of mystery which, I figured out cuz I am a mystery queen. The secondary characters played by Rihanna and Clive Owens were cool. The alien races were original looking but not so out there I got distracted by their otherworldlyness. I would recommend this to people who like fun, nonstop action, adventures in space with bright imagery and a lil morality lesson with their entertainment.