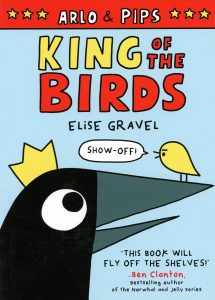 Arlo & Pips: King of the Birds by Elise Gravel
Format: Book
Who’s it for: Kids

Arlo is a bird, and not just any bird- he’s a crow! And as Arlo loves to explain, a crow is the King of the Birds! Arlo can’t wait to tell readers, and his tiny new songbird friend Pips, all about how amazing a crow can be. Arlo is smart! Arlo can imitate almost any sound! Arlo has one of the biggest brains of all birds! Arlo has beautiful glossy black feathers! Arlo can count to 6, remember up to 4 hiding places, play dead, and play tricks on other birds! Arlo knows EVERYTHING! Or does he? It turns out that Arlo is new to living in the city, and maybe little Pips knows some things about humans and city life that Arlo really needs to learn. Will Arlo learn a little humility along the way? …probably not. But he might just learn to be a good friend. This early reader is the 2020 Maryland Blue Crab Young Reader Award winner for Beginning Fiction.
Find it (and other Arlo & Pips books) in the catalog! 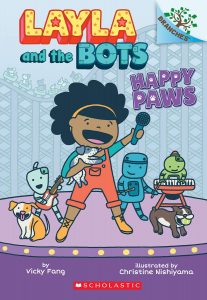 Layla and her robots are rock stars and inventors! They’re super excited to perform at Happy Days Amusement Park… until they hear that the park is closing down. The whole town has gone dog-crazy, and everyone is spending their time at the dog park. To save Happy Days, Layla and her bots will have to use all their design and engineering skills to create something totally new- “Happy Paws!” the amusement park for dogs. This easy chapter book is a 2021 Maryland Blue Crab Young Reader Award honor book for Beginning Fiction.

Find it (and other Layla and the Bots books) in the catalog! 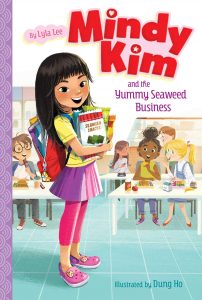 Mindy Kim and the Yummy Seaweed Business by Lyla Lee, Illustrated by Dung Ho
Format: Book
Who it’s for: Kids

Mindy is NOT excited to be the new kid at school. She and her Appa (Dad) have moved from California, where there were plenty of other Korean-American kids at her multicultural school, to a small town in Florida where she’s the only Asian student. Mindy doesn’t know anyone, and the other kids think her yummy Korean food is weird- at first. But then someone wants to try her spicy seaweed snacks, and suddenly everyone wants to trade snacks! Mindy and her new friend Sally get the great idea to sell the yummy seaweed snacks… but a jealous classmate tries to spoil everything. Soon Mindy’s fighting with her only friend, in trouble with the teacher, and afraid to tell Appa what’s going on. How can Mindy set things right? Mindy Kim and the Yummy Seaweed Business is the 2021 Maryland Blue Crab Young Reader Award winner for Transitional Fiction.

Find it (and other Mindy Kim books) in the catalog! 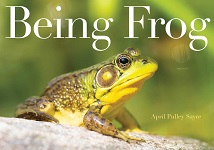 Frogs are fascinating, and Being Frog by April Pulley Sayre is a beautiful look at these amphibians for young naturalists. Stunning photos and simple rhyming text show a tiny frog egg growing into a tadpole, then a tiny froglet able to leave the water. Readers then follow one day in the life of a green frog in a North American woodland pond: we see the frog swimming, climbing, hunting, missing its prey, and trying again. The author Sayre uses simple language to show that frogs are living creatures with their own needs, habitats, and behaviors- not playthings, but wild animals. An author’s note gives more information about how she observed and photographed the frogs over many months to create this lovely book, which is perfect for the youngest nature-lovers. 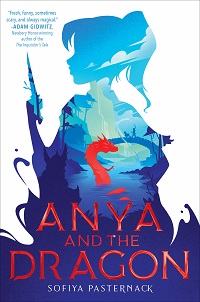 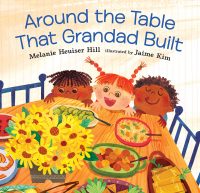 Around the Table that Grandad Built by Melanie Heuiser Hill, illustrated by Jaime Kim
Publication/Release Date: 2019
Format: Book
Who it’s for: Kids

Around the Table that Grandad Built is a lovely celebration of family, tradition, memory, and gratitude. In cumulative text along the lines of “The House that Jack Built,” a joyful multicultural family prepares to share a special meal. They begin by moving “the table that grandad” built in to the center of the room, then gather “the sunflowers picked by my cousins” and “the napkins sewn by mom.” Each item used to set the table is special and treasured. Then comes the food- produce from the family’s garden and favorite recipes made with love. When all is ready, the extended family gathers to hold hands and give thanks around the table that Grandad built. This picture book is perfect for Thanksgiving, or any special family celebration!
Find it in the catalog.