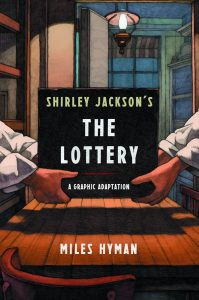 Shirley Jackson’s short story “The Lottery” continues to thrill and disturb readers even after it was first published. “The Lottery” introduces upsetting questions about conformity, customs and traditions, and the ritualized violence that may besiege even the most rural, passive community.

This graphic adaptation by Jackson’s grandson, Miles Hyman, allows readers to experience “The Lottery” in a new format. In a small American community, the current residents are alive with eagerness and anxiety when they wake on the morning of the twenty-seventh of June. Everything has been organized for the town’s yearly ritual—a lottery in which all families must partake, and nobody desires to win.

Find Shirley Jackson’s “The Lottery” in the catalog! 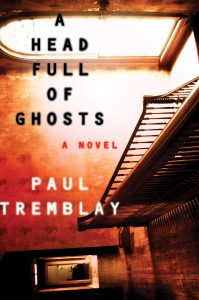 A Head Full of Ghosts by Paul Tremblay
Format:  Book
Who it’s For: Teens and adults

The lives of the Barretts, an ordinary family, are torn apart when their fourteen-year-old Marjorie shows signs of acute schizophrenia. To her parents’ misery, the doctors cannot stop Marjorie’s descent into madness. Their stable home soon devolves into a house of horrors. The family grudgingly turns to a Catholic priest for assistance. Father Wanderly recommends an exorcism; he believes the helpless Marjorie is the target of demonic possession. He also contacts a production company that is keen to document the Barretts’ troubles. With financial troubles approaching, the family agrees to be filmed, and thus become stars of The Possession, a successful reality television show.

Fifteen years later, Marjorie’s younger sister, Merry, agrees to be interviewed. As she reminiscences about the events that occurred when she was just eight years old, secrets and painful memories emerge that contradict what they portrayed on the reality show. This book keeps you guessing throughout, making you question what really happened.

Find A Head Full of Ghosts in the Catalog! 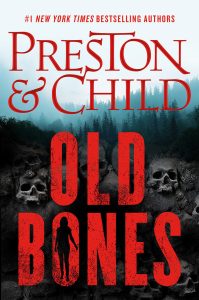 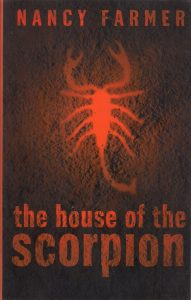 Ararat by Christopher Golden
Format:  Book
Who it’s For:  Adults

After a huge avalanche forces Adam Holzer and Meryam Karga, a couple climbing Mount Ararat, to hunt for shelter in one of the mountain’s caves, they stumble upon what they believe to be Noah’s Ark. Thrilled by their finding, the couple visions of turning their luck into a best-selling biography. Inside the ark is a great coffin that rapidly becomes the primary interest of the crew. Speculating who might be inside, with theories stretching from Noah himself to other biblical figures–the crew, after a passing disagreement, makes the choice to break open the coffin. But instead of discovering Noah, a horrible, evil-looking, horned cadaver rests inside.

What could go wrong?

Quite a lot. Particularly when an invading strangeness runs its nails down everybody’s back; when the crew turns abnormally malicious, needy, or fearful. When the crew awakens screaming, mysteriously overwhelmed by long-buried childhood terrors. When people disappear.

Find Ararat in the catalog! 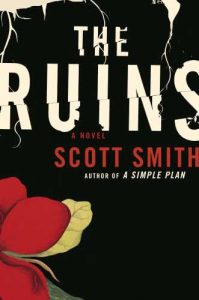 The Ruins by Scott Smith
Format: Book
Who it’s for: Adults

Two young couples decide to take a trip to Mexico.  The group enjoyed the beach, hotel, and making friends with fellow tourists when the brother of one of the couples goes missing.   The group ultimately decides to go searching for the missing brother.  Trekking through the Mexican jungle, the group stumbles upon a village which is only the beginning of the creeping horror; they endure throughout the story.  What started as an exciting day-trip gradually spirals into a terrifying nightmare when they find the remains of an ancient ruins site… and the disturbing presence that lurks there.

Find The Ruins in the catalog