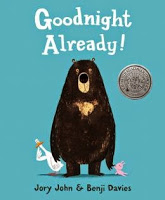 Goodnight Already by Jory John is a story about a very tired bear and a very bothersome duck who happens to live next door. Bear is so tired he just wants to sleep and sleep. Duck is up drinking plenty of coffee. Duck is so bored and so wide awake he wakes up Bear to see if he wants to hang out. Bear is not happy about being woken up, but Duck is not giving up. He asks Bear if he wants to play cards, watch a movie, make smoothies, even start a band. Whatever Duck suggests Bear is not interested. Bear just wants Duck to leave him alone so he can sleep. Bear tries to go back to sleep but Duck returns asking Bear if he can borrow ingredients so he can make cookies. Bear says “NO.” Bear tries to go back to sleep. Duck returns with what he says is an emergency. Poor Duck has stubbed his beak. Bear tells Duck to get out so he can sleep. Duck finally gets tired and goes home and dozes off. Now, however, poor Bear is home wide awake. See this book listed in our catalog 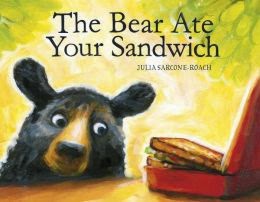 The Bear Ate Your Sandwich by Julia Sarcone-Roach. Well, your sandwich is gone. What happened to it? Glad you asked! A bear ate it! After falling asleep in a truck full of berries, the bear found himself in an unknown forest, your city. He enjoyed the still-scratchy bark and the squishy mud, and then he saw your sandwich sitting all alone on a bench. He made sure no one could see him and then… he ate your sandwich! The bear, missing his own forest, made his way home. Full of berries and your sandwich, he went to sleep. Yep, that is definitely what happened to your sandwich, I’m sorry to say… If you like clever twists and beautiful illustrations, try reading this one aloud with your child. You’ll get a kick out of the bear’s many facial expressions and the ending will leave everyone laughing. See this book listed in our catalog 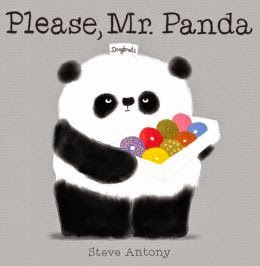 In Please Mr. Panda by Steve Antony, Mr. Panda has some colorful (and no doubt delicious) doughnuts to give away. “Would you like a doughnut?” he asks the penguin. “Give me the pink one,” says the penguin. “No, you cannot have a doughnut. I have changed by mind.” Mr. Panda offers, and then takes back the offer of, doughnuts to the skunk, the ostrich, and the whale. But when the lemur sweetly asks “May I have a doughnut? Please, Mr. Panda?” Mr. Panda gives him ALL the doughnuts. He was just waiting for that magic word! Please! To the polite lemur go the doughnut spoils! If your little one is a fan of animals, or doughnuts (and if you’re a fan of dry humour), or if anyone needs a refresher on manners, be sure to check this story out soon. See this book listed in our catalog 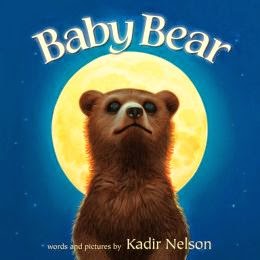 Baby Bear by Kadir Nelson is a beautiful book about a little bear who’s wandered away from home. Feeling lost and alone, he seeks direction from other animals in the forest. The Mountain Lion suggests he retrace his steps, but Baby Bear wasn’t really paying attention. The Squirrels say when they’re lost they just hug a tree and think of home, but then any tree is their home really. Baby Bear thinks hugging a tree seems silly, but he tries it anyway. It doesn’t work. Ram says when he’s lost he climbs higher to see further, and that singing a song helps. Owl hears Baby Bear singing and tells him not to give up. Baby Bear’s journey is long and arduous, but he keeps going with the help of his forest friends, until he’s finally home. See this book listed in our catalog 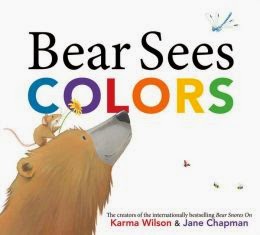 Bear Sees Colors by Karma Wilson and Jane Chapman is a simple book about colors. Bear and Mouse are just walking along chatting when Bear sees the color blue. He sees blue flowers, blueberries and a blue pail. The author encourages the reader to find the blue things on the page. Then Bear and Mouse and their friend rabbit spy the color red and again the reader is encouraged to find the red things on the page.The story continues with the colors yellow, green, and brown. This is a cute story about colors and friendship. At the end of the story the animals all get together and have a big picnic with lots of food, lots of colors, and lots of friends. See this book listed in our catalog 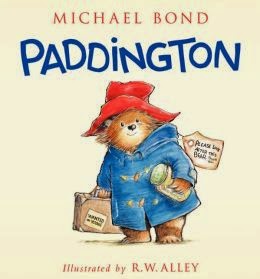 Paddington by Michael Bond, illustrated by R. W. Alley, is a story about a little lost bear, a bear that stows away on a ship headed all the way to England! The bear is discovered at the train station by Mr. and Mrs. Brown with a note around the bear’s neck that says “Please look after this Bear. Thank you.” “Wherever did you come from?” they ask. “Darkest Peru, I’m not really supposed to be here at all. I’m a stowaway.” he says. After chatting with the little lost bear, Mr. and Mrs. Brown decide they just can’t leave him all by himself, and invite him to stay with them. He says he would like that very much, for he has nowhere to go, and everyone seems in such a hurry. They name him Paddington, after the train station. Paddington goes to get a snack with Mr. Brown while Mrs. Brown goes to collect their daughter Judy. Paddington is so hungry after only eating marmalade on his trip, he slips in the tart at the snack table, and slide in the cream, landing in a cup of tea! After an eventful trip home in the taxi (he got cream and jam on the cab driver’s coat), they arrive home, and Paddington is welcomed into the family. See this book listed in our catalog