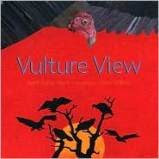 Vultures are truly fascinating creatures. Teach your child about these interesting birds via Vulture View by April Pulley Sayre with illustrations by Steve Jenkins. Chances are you’ll learn a lot too. For instance, did you know that vultures glide on pillars of hot air called thermals? Or that their heads have very few feathers because picking from dead animal carcasses is universally messy? You may find these carrion eaters disgusting, but they serve an important role, as nature’s clean up crew! This book is especially good for boys who might think eating garbage sounds funny or cool. You could also take your child bird-watching after reading (I know our library parking lot is a perfect place to see some vultures)!

Stranger in the Woods is subtitled “A Photographic Fantasy” and that’s exactly what it is. Created by wildlife photographers Carl R. Sams II and Jean Stoick, the book takes us into a snowy forest. “Take care!” the blue jay caws to the family of deer below, “Stranger in the woods!” All the animals are a-flutter seeking out this stranger. “I do see him!” chatters the squirrel. Who is it? The creatures all wonder. It’s an edible snowman! The animals enjoy the stranger, left for them by some thoughtful children. Besides a lovely story and beautiful pictures, the book also includes a “Recipe for a Snowman” so you too can leave a treat in the woods.

You may have already heard about And Tango Makes Three by Justin Richardson and Peter Parnell. It was the most challenged book of 2008. If you’re at all curious to see what the fuss was about, I highly recommend you check it out, because beneath all the controversy this is a story for children about an unconventional family of penguins. Roy and Silo were two real male penguins at the Central Park Zoo who played surrogate fathers to an egg, helping to bring little Tango into the world, and you can still visit them all today in New York City! Heartwarming illustrations provided by Henry Cole.

Yertle the Turtle and Other Stories is a collection of three great stories by Dr. Seuss, each with a lesson to teach us (as Seuss so often has). “Yertle the Turtle” is supposedly an allegory for Hitler-era fascism (and Horton Hears a Who is supposedly an allegory for Japanese internment camps. Who knew Seuss was so political). Yertle is the king of all he sees, which is a bunch of turtles in a pond. But he realizes if he commands all the turtles to stand in a stack with him on top, he could rule so much more! His plan seems to go swimmingly until Mack, the poor base turtle, does something very impolite… In “Gertrude McFuzz” (one of my childhood favorites) we meet a bird with a bit to learn about envy and vanity, and then there’s “The Big Brag” in which a rabbit, a bear, and a worm argue over who has the best senses. All classics!