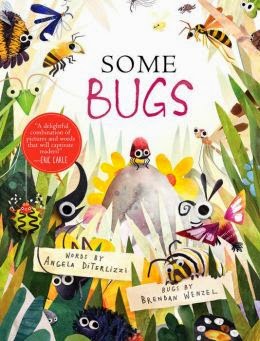 Some Bugs by Angela Diterlizzi is a story about all kinds of bugs. There are bugs that sting, bugs that bite, bugs that fight, crawl, flutter, and stink. There are bugs that hop, glide, swim, and hide. So many different kinds of bugs! At the end of the story, the book suggests going out and trying to find some bugs in your own backyard. The end pages show tons of bugs, and list the names of each, so you can identify them. See this book listed in our catalog 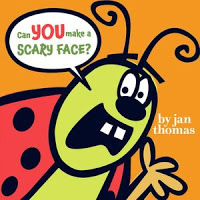 Can You Make a Scary Face by Jan Thomas is an interactive, fun-filled book that is sure to wiggle giggles out of any reader. The book begins with a somewhat bossy ladybug giving instructions. Stand up. Sit down. No, stand back up. And then, the fun begins! While you pretend there is a bug on your nose, in your mouth, or on your shirt, you’ll find yourself wiggling and dancing around trying to get rid of this imaginary bug. Readers are sure to have fun with their imaginations as they laugh their way to the end of the book where they will need to make a scary face to finally get rid of that pesky bug! This book is great for one-on-one reading and even large groups! See this book listed in our catalog 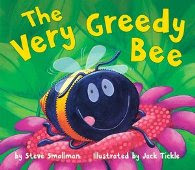 The Very Greedy Bee by Steve Smallman. All the bees work hard making honey and cleaning the hive, except the very greedy bee. He spends all his time gobbling up pollen and guzzling nectar, refusing to share with anyone. One day the very greedy bee finds a meadow full of flowers and decides not to tell anyone so he can keep it all for himself. The greedy bee whizzes from flower to flower, slurping and burping, growing fatter and fatter, until at last his tummy is full. After a nap the greedy bee tries to fly home, but is too heavy to fly, and falls to the ground! Alone and scared, two fireflies and some ants help to get him home safe. The greedy bee invites everyone to enjoy a midnight feast of yummy, runny honey. See this book listed in our catalog

Imagine being afraid of everything–where a winding river looks like a snake, an old log looks like a scary dog, and the shadow of a bicycle looks just like a giant! In Absolutely Not by Matthew McElligott, we meet two little bugs named Frieda and Gloria. Frieda is afraid of everything. She never wants to leave her house because it’s “frightening” outside. Gloria isn’t afraid of anything. She loves adventures! One day Gloria comes to visit. She wants to take a walk with her best friend, but Frieda says “absolutely not.” After a little coaxing, Gloria and Frieda head out for a walk. Frieda sees scary images in everything they see–scary things that would love to eat two little bugs right up! Gloria keeps convincing her that it’s only her imagination. When they come to a suspicious looking “tree,” Gloria learns that she must be more careful, and Frieda finally sees something that isn’t just her imagination! Readers will enjoy spotting the scary images on each page as the bugs walk along. Find the “frogs” in a pile of leaves. See if you can find the “someone” watching them as travel across a meadow. McElligott has done a wonderful job of giving us a scare using everyday things found in nature! See this book listed in our catalog 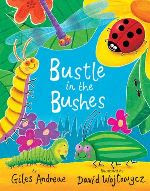 Be prepared to meet some of the wiggly, creepy, crawly bugs that may live right in your own backyard, like the earwig, stick insect, or the amazing centipede, in Bustle in the Bushes by Giles Andreae. Children will have the opportunity to meet fifteen amazing insects in this journey through the yard, while learning some interesting facts about each one. The bright, cheerful illustrations mixed with the fun rhymes will keep children turning the pages to discover what lurks by the water, on the ground, or in the air. Children will most likely be begging to explore their own yard to see what insects they can discover after taking this backyard adventure! See this book listed in our catalog

“I Have a Little Problem,” Said the Bear by Heinz Janisch and Silke Leffler is a book that teaches an important lesson, in my opinion, for children to learn. Meet the bear, with a problem. “I have a little problem,” he says. “You see, I…” but as he is about to explain, he is interrupted. First, by the inventor, who is sure that the bear’s problem is he is too heavy, so he makes the bear wings, so that he’ll feel lighter. Then the tailor, who is sure that the bear’s problem is that he has no scarf to wear. Then the hatter, who is sure a fine hat is the cure for whatever problem the bear might have. The bear visits many folks, but no one lets the bear tell them what his problem is! They just assume they can fix it with some new thing. Finally a fly sees the bear moping, and asks what’s the matter. The bear says “I don’t want to talk about it. No one listens to me anyway.” But the fly is willing to listen. It turns out the bear’s little problem is that he is afraid of the dark, and needs a friend in his cave with him at night. It just so happens the fly would be happy to stay in the bear’s cave, and be his friend. Being a friend means being a listener, and the moral of this story is when someone has a problem, we should listen, instead of just assuming we know what’s best for them. See this book listed in our catalog