Sora and the Cloud by Felicia Hoshino, translated by Akiko Hisa. Sora is a little boy who loves to climb. One day he climbs a tree and catches a ride on a cloud. The cloud floats away and takes Sora way up into the sky. They soar with kites and airplanes. The cloud is soft and fluffy; a very comfortable place to nap, so Sora rests his head, and dreams of earthbound things, like splashing in puddles and digging in sand. The cloud returns to the tree and promises Sora future adventures with the wink on an eye. This beautifully illustrated book is written in both English and Japanese, and includes notes to readers in the back to help explain the cultural significances mentioned in the book. Dream Big, Read… on a cloud, way up high in the sky with Sora… or in your imagination. See this book listed in our catalog 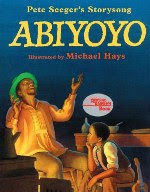 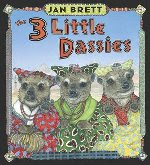 The 3 Little Dassies by Jan Brett is a twist on the classic tale of the three little pigs. No surprise at the wonderful illustrations of Brett, as the story, which takes place in Namibia, portrays the adventures of three Dassies who have grown old enough to set forth and fend for themselves. Under the watchful eye of a guardian Agama Man, they travel up a mountain and try to settle into homes where they will each be safe from the hungry old eagle. “I’ll flap and I’ll clap and I’ll blow your house in” he rants and beats his wings. The eagle may displace a Dassie from the grass house, and from the house made of twigs, but what will happen when he tries to destroy the house of stone? See this book listed in our catalog 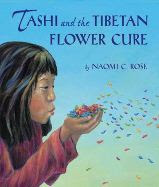 Tashi and the Tibetan Flower Cure written and illustrated by Naomi C. Rose. Tashi a young Tibetan girl is worried about her grandfather. Her Popola has been sick. Tashi loves listening to his stories songs and chants about his village in Tibet where he grew up. Popola tells Tashi about how people in his village help people get better with flowers. The pollen from many flowers floats on the wind and helps cure sickness he says. Tashi and her Amala walk to a nearby nursery and arrange to bring Polola there on weekends. They bring a basket with tea cookies, butter, and salt with them. At first no one stops to visit when they are there. But as the summer goes on more and more people have heard of the cure and want to help so they stop by to visit. At last Popola’s doctor says he is getting better. The story includes some notes on Tibet and Tibetan medicine and is beautifully illustrated with impressionistic paintings. It presents a tender bond between grandchild and grandfather and shows the compassion of a community that comes together. See this book listed in our catalog

Reading is something that many children do every day with their families, but for children who live in places without a library nearby having new books can be a very special treat. In Waiting for the Biblioburro by Monica Brown, with illustrations by John Parra, we learn the true story of Luis Soriano Bohorquez, a traveling librarian who brought books to children in small villages all across the country of Columbia. In the story we meet Ana, a young girl who loves to read but has not had any new books since her teacher had to move away. One day the Biblioburro comes to town! Ana is happy to learn that libraries don’t have to be in buildings, and can even travel by burro, or donkey. Ana borrows many books, and waits impatiently for the Biblioburro to return. While she waits, she writes her own book about the Biblioburro, which the traveling librarian adds to his collection so that other children can read her story. Anyone with a love of books and libraries will be enchanted by this book. If your child wants to know more about the Biblioburro, the author includes information about the real librarian that inspired the story. With gorgeous illustrations, and beautiful storytelling, this is a book that children and adults will enjoy together. See this book listed in our catalog

Conejito: A Folktale from Panama, by Margaret Read MacDonald, illustrated by Geraldo Valério is a fabulous read-aloud (and sing-aloud, and dance-along) story based on a Central American folktale. Conejito (“little bunny”) is on his way to visit his Tía Mónica, who lives on top of the mountain. Just the thought of his beloved auntie (and the delicious food she’ll cook for him) makes Conejito sing and dance! But to get to the mountaintop, he must pass by Señor Zorro, Señor Tigre, and Señor León (a fox, a tiger, and a lion), all of whom think Conejito would make a delicious lunch! The little bunny is a fast talker, and he convinces each hungry animal to wait until later to eat him – after all, he’ll be much fatter after a visit with Tía Mónica and her excellent cooking! But once the visit is over, how will Conejito get past the villains once more and return safely home to his mamá? Tía Mónica has a brilliant plan to outsmart them all, and Conejito is just the bold little bunny to carry it out. The bouncy, repeating text, the sprinkling of easily understood Spanish words, Conejito’s silly song, and Geraldo Valério’s brilliant illustrations will make this book a favorite to read and sing with your little bunny. See this book listed in our catalog