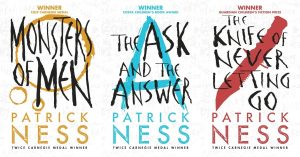 Series: Chaos Walking by Patrick Ness
First Book: The Knife of Never Letting Go
Who’s it For: Teens and Adults

Perhaps if Todd repeated his name, he could control his mind. He hated that his thoughts were broadcast, like every other male in Prentisstown. And animal. Todd’s dog, Manchee, frequently reported to him, “Poo, Todd. Gotta poo.”

Todd kept busy working on the farm for his two fathers, Cillian and Ben. He wasn’t really related to them. They had promised to take care of Todd years ago when his mother died of the disease. In fact, there were no females at all in Prentisstown. He vaguely recalled that his mom sang to him. He had no memory of his deceased father. Ben had a small leather diary that his mom left for Todd. Yet Todd didn’t know how to read.

One day Todd came across an injured girl who seemed to be about his age, 13.  Had she crash-landed? Strangest of all, she had no noise!  Her thoughts were completely private.  Her name was Violet.  Back at the farm, Ben shoved a sack of food, emergency supplies, a map, and the diary to Todd. “Go!”  Mayor Prentiss and a posse were galloping their way.  Todd heard gunshots.  Cillian!  “We lied. Your mother was killed by Mayor Prentiss.  Go!” What would Mayor Prentiss do if he caught them?  Todd, Violet, and Manchee, fled into the forest.  Where would they go? Why was Todd’s mother murdered?

I actually saw the movie Chaos Walking before I read the series.  The movie intrigued me.  I was thoroughly engrossed in the plight of Todd Hewitt and Violet.  I loved the humor of the talking animals, from Manchee, my favorite, to talking sheep, horses, and more.  And I appreciated Todd’s sense of honor and the bond that he and Violet developed.  Yet, life is complicated and sometimes hard choices have to be made…

Discover the first book in this trilogy here!