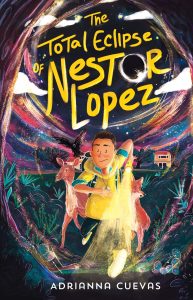 The Total Eclipse of Nestor Lopez, by Adrianna Cuevas
Format: Book
Who is it For: Kids

The Total Eclipse of Nestor Lopez is an honor for the 2021 Pura Belpré Award in the Children’s Author category. First established in 1996, the Belpré Award is presented to a Latino/Latina writer and illustrator whose work best portrays, affirms, and celebrates the Latino cultural experience in an outstanding work of literature for children and youth.

Nestor, a young boy who has moved to a new town, must not only navigate going to a new school and having a father deployed overseas, but he also struggles to keep his gift of talking to animals a secret. But as animals start disappearing in the woods around his house, Nestor finds himself trying to uncover the truth behind a mysterious creature and put a stop to it before it’s too late.

Adrianna Cuevas draws on Panamanian and Costa Rican myths to present to a thrilling adventure for young readers.

Find The Total Eclipse of Nestor Lopez in the catalog. 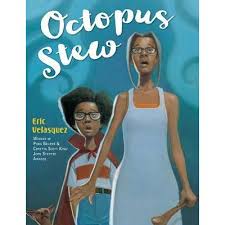 Octopus Stew by Eric Velasquez
Who Its For: Kids
Format: Book

Eric Velasquez (winner of the Pura Belpre Award for Grandma’s Gift and the Coretta Scott King -John Steptoe Award for Piano Man) has written a charming story about an Afro-Latino boy named Ramsey. One day at Grandma’s, Ramsey, an artist and lover of all things superhero, paints a picture of “super Octo”, a superhero octopus. This got Grandma thinking about making pulpo guisado, octopus stew. They go shopping for the ingredients, which included one large and creepy octopus! Ramsey has a bad feeling about this, but home they go where Grandma cleans the octopus and throws it into the boiling pot. They sit down to do some homework when suddenly they hear strange noises coming from the kitchen! BLIMP! BLUMP! BRR! “Que sera esto?” asks Grandma. THUMP!! To their horror, they  find a HUGE octopus climbing out of the pot and with one tentacle it snatches up Grandma! How will Ramsey defeat the mighty octopus and save her? This story will delight all your superhero and octopus fans; check out the foldout pages in the middle of the book and the Author’s Notes for extra layers to the story (or read to the end first), and don’t miss the Glossary in the back, as the author uses many nonstandard Spanish phrases throughout the story, just as his own family did in his childhood home.