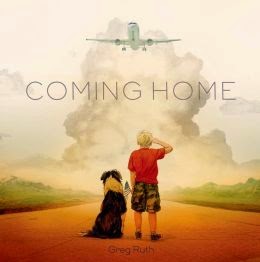 In the beautifully illustrated book Coming Home Greg Ruth touches on one of the most difficult and wonderful experiences for many families: the moment when a service member returns home. The nearly wordless story demonstrates through the detailed water color and pencil drawings the intense amount of emotion that both those coming home and those waiting for loved ones may feel in those last few hours and minutes of separation. The joy and relief displayed on the characters’ faces will bring a smile (and maybe a tear) to the face of readers. This would be an especially appropriate and book to read and discuss with a little one getting ready to see mom or dad after a long absence. See this book listed in our catalog 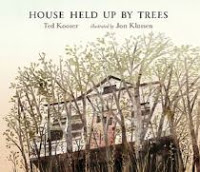 Driving down our quiet country roads, it isn’t rare to come across an old, abandoned farm house. Sometimes you’ll see them in the middle of a field, surrounded by trees. In fact, sometimes it looks as though the house is being held up by trees. In the book House Held Up By Trees by Ted Kooser, with illustrations by Jon Klassen, you’ll learn about the life cycle of a house: how it was built to become a home, a place where people once lived, learned, and grew. In time the people changed and moved away. The house remained. Sometimes, old houses are bought and remodeled, redecorated, made new. Sometimes they sit, alone, abandoned to become part of the landscape, to become a house held up by trees. The next time you drive past an abandoned building, encourage imaginative thought by asking your child who may have lived there, what colors they painted the walls, etc. Then ask if they think anything lives there now? A possum family, maybe? See this book listed in our catalog

For the young bird enthusiast in your life, try United Tweets of America: 50 State Birds, Their Stories, Their Glories by Hudson Talbott. This fun and festive non-fiction picture book lists the official bird of all fifty of the United States of America (and the District of Columbia), from the Nene of Hawaii (the rarest state bird) to the Northern Cardinal (the state bird of Illinois, Indiana, Kentucky, North Carolina, Ohio, Virginia, and West Virginia)! The parade of birds is presented like a pageant, hosted by the nation’s most symbolic bird, the bald eagle! Each bird gets a page with info about the bird, and the state they represent, including the state motto, capital, and interesting facts like… Did you know the state neckwear of Arizona is the bolo tie? The state cookie of Massachusetts is chocolate chip? The state dance of South Carolina is the shag? This pageant could get ugly, with all those beautiful birds vying for top prize, but instead ends in a resounding sing-a-long rendition of “America the Beautiful!” See this book listed in our catalog

Submitted by Tess from Lexington Park!

“I’m Sunday Chutney and I’m a bit unusual” proclaims the titular character of Sunday Chutney by Aaron Blabey. What looks like a strange book on first inspection, turns out to be a touching and timely story about what it’s like to be the “new kid” as many of our local military brats might be able to relate to. Because of Sunday’s dad’s job, she’s lived all over the world, which is great, but with new homes, come new schools, filled with new people. Most kids think Sunday is weird, but she doesn’t really mind! She likes who she is! She’s very sure of the things she likes (like drum solos and marine biology) and the things she doesn’t like (like her lazy eye and creamed corn). Sometimes she feels lonely, but she’s getting really good at making new friends. Maybe your child would like to make friends with Sunday Chutney! See this book listed in our catalog 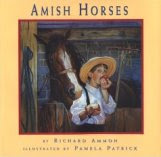 Amish Horses by Richard Ammon. This story is about horses and their role in daily Amish life. A little boy tells the story of Amish life and the process of feeding the animals, shoeing the horses, and going to an auction to buy or sell their animals. This book gives you a great glance of the everyday life of an Amish family from the work they do, to the games they play for entertainment. This story shows the process of planting and mowing hay. It also shows how the entire family helps on the farm. The pastel horse illustrations look so real you want to reach out and pet the horse. This is a great book for horse lovers of all ages!

B is for Blue Crab by Shirley C. Menendez, illustrated by Laura Stutzman, is a fun way to familiarize your child with the letters of the alphabet, as well as Maryland state symbols and landmarks. Each page has a letter, a short blurb for your child, and a larger, more informative blurb for you! You might be surprised by how much you can learn about the Old Line State. For instance, I was bemused to find that J is for Jousting the state sport of Maryland, and interested to discover T is for Tubman–Harriet Tubman that is, who was born in Dorchester county!