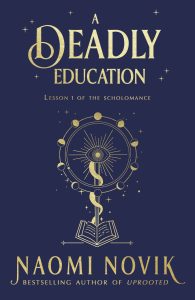 A Deadly Education by Naomi Novik
Format: Book, ebook, audiobook
Who is it For: Adults

“In Wisdom, Shelter.” The official motto of the Scholomance, a giant, foreboding school for young wizards and witches. In the Scholomance, failure means death—or at the very least, lots of pain—as the school constantly throws all manner of hungry beasts and spirits at its students. Having allies watching your backs – as even a tray of scrambled eggs can be deadly – is a must, but making friends is rather hard to do when a dark prophecy is looming over your head and everyone brands you as a creepy outcast. Lacking any such friends and specializing in city-flattening magic, Galadriel Higgins has had to fight and strategize for her spot in the school more than most; for if she let loose, even a little, there would be dire consequences. To make matters worse, the entire school seems to think she has taken up with Orion Lake, the shining hero of the junior class, because he inadvertently saved her on a few occasions. How is she supposed to become dark empress of the world, if she keeps having to be saved?

This book has been one of my favorites this year! If Hogwarts took a page from the Hunger Games, you would end up with the Scholomance. This book is dark and gritty and the hard-core, survival mindset of the students is totally different from the typical fantasy settings. I thought Novik had some compelling ideas about how both wizards and the mundane interact with magic. I am very excited to read the next book in the series.

Find A Deadly Education in the catalog. 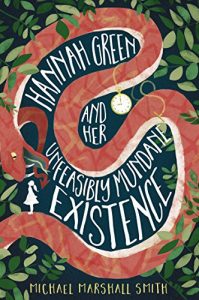 Hannah Green is eleven years old and her parents are separating. Her mother is working in London and Hannah is home in Santa Cruz with her father. She misses her mother, but finds herself missing her father more as, though he is right in front of her, he seems to be lost. She goes through her daily routine – school, homework, food, bed. Her life becomes “horribly, unfeasibly mundane.” Until her father sends her to stay with her world-traveling grandfather for a while in a cabin in the Pacific Northwest and the Devil shows up. The Devil has discovered that he is no longer benefitting from the dark power usually transferred to him when humans commit bad deeds. This might have something to do with a machine Hannah’s grandfather built.

Hannah, her grandfather, the Devil, and an accident imp named Vaneclaw travel to the Behind (a version of Hell you can get to without dying) via Siberia to try to get to the bottom of the mystery. Meanwhile, Hannah’s father has disappeared and a man with bad intentions sets out toward Santa Cruz to fulfill an unknown mission. All these individuals come together at a roller coaster on the Santa Cruz boardwalk where the fate of humanity will be decided.

Reminiscent of Terry Pratchett, Neil Gaiman, and Jasper Fforde, Smith has produced a story and characters that stick with you and leave you wanting more.