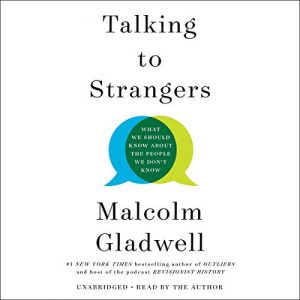 Talking to Strangers: What We Should Know About the People We Don’t Know by Malcolm Gladwell
Format: eAudiobook, eBook
Who it’s for: Adults

Talking to Strangers takes a close look at how we interact with each other and what assumptions we make everyday that change the way we communicate, judge, and interact. Gladwell, a #1 New York Times bestselling author dives into what at first appear to be separate and unrelated true stories of human interactions but then lead to his discussion of how many of the tools and strategies we use to make sense of people and their actions actually don’t help us make good judgements or decisions. If we don’t know how to talk to strangers, we are inviting conflict and misunderstanding in ways that have a profound effect on our interactions and relationships.

Gladwell narrates the audiobook and it is highly recommended. Not only do you hear Gladwell, but also interviews of many of the people he discusses. Even the court transcripts are brought to life with actors re-enactments. It is fascinating to learn about famous examples such as Bernie Madoff, Amanda Knox, and Sylvia Plath, hearing directly from many of the people involved in these real-life stories.

Find it on Libby/Overdrive 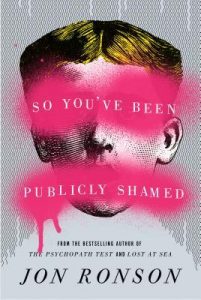 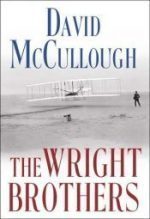 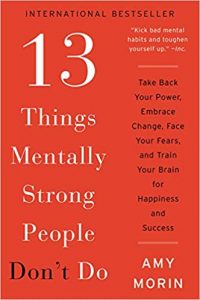 Let’s say you’re trying to get your body into good physical shape, you might go to the gym and have a long, heavy work out and feel like you’re moving in the right direction.  However, if you eat a box of donuts on the way home from the gym then you’ve just erased all your hard work!

The same thing can happen with our mental health.  There are many very positive things we can do for ourselves like practicing mindfulness, gratitude, or yoga but author Amy Morin points out that we might be sabotaging our best efforts with some bad mental habits.

Do I stress about things I can’t control?  Do I try to please everyone? Do I resent other people’s success? These are just three out of the thirteen bad mental habits that can drag us down and undermine our happiness.

Check this book out and give your mental health a workout. We can’t always change our circumstances but we do have control over our attitude and that can make all the difference! 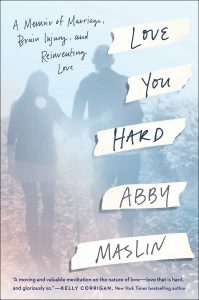 Love You Hard: A Memoir of Marriage, Brain Injury and Reinventing Love by Abby Maslin
Format: Book
Who it’s for:  Adults

In August 2012, Abby and TC Maslin lived in the Capitol Hill area of Washington D.C. with their young son, Jack. TC worked as an energy analyst and Abby was a school teacher. TC was attacked while walking home from a Nationals game late at night.  TC was beaten nearly to death by three young men who took his cell phone and debit card.  They left him bleeding and hurt on a sidewalk a few blocks from his home.  When Abby woke up in the night to find out that her husband wasn’t home, panic set in.  Hours later Abby found out that her husband had been taken to the hospital but she didn’t know if he was alive or dead.

After many days and months of physical rehabilitation, TC did survive, but was unable to walk and talk.  Abby had to take over his complete care, teaching him to read and talk again.  There were no guarantees of his future life after the tragedy.  The two of them had to learn to trust and love each other again.  During their agonizing months both of them had changed.

This is a true story and has connections to St. Mary’s County, Maryland. Abby is a good writer and I was especially touched by her prologue that describes when she and TC met for the first time. This account is a raw and inspiring story with an amazing outcome. TC Maslin has an inner strength that helped him to beat the odds of not only surviving but conquering his disabilities. While still re-learning to walk and communicate, TC realized how much Abby did to take care of him, he said, “But you’ve done everything for me. Do you know that? I love you, honey. I love you so hard.”