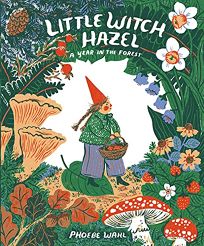 Little Witch Hazel: A Year in the Forest by Phoebe Wahl
Format: Book
Who it’s for: Kids

In this four-season volume, Little Witch Hazel follows a tiny witch who lives in the forest. Hardworking and kind Hazel raises a baby owl, learns how to slow down and rest, and helps her friends and neighbors however she can. The world that Wahl creates with her beautiful illustrations and storytelling is whimsical, but also rooted very deeply in connection with nature and community. Hazel has a steadfast, quiet confidence and a commitment to being of service to others.

Little Witch Hazel is a soft hug of a book, with talking woodland creatures, homes made in tree stumps, and witches who heal. A sweet and gentle read for children ages 4-8. 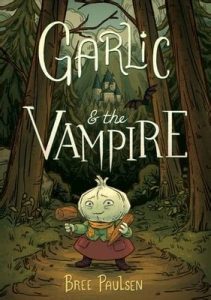 Garlic and the Vampire by Bree Paulsen
Format: Book
Who it’s for: Kids

Garlic, an enchanted garlic bulb, lives in a quiet garden with other enchanted vegetables under the care of their friend and mentor, Witch Agnes. Garlic chronically oversleeps and over-worries, but she loves tending the garden and finds her bliss safely in her comfort zone.

Interrupting their idyllic existence, smoke rises from a nearby (and supposedly long abandoned) castle. A vampire has moved in! Garlic, obviously having natural resistance to vampires, is volunteered to investigate and deal with their terrifying new neighbor. She doesn’t know how she could possibly do that – she’s just a little garlic! – but with encouragement from her best friend, Carrot, Garlic overcomes her self-doubt and confronts the vampire. Even with her newfound courage, it doesn’t go exactly the way she expects.

A wholesome and absolutely adorable story, Garlic and the Vampire is a middle-grade graphic novel about anxiety and bravery, believing in yourself, and perhaps most importantly, not judging a vampire just by his teeth.

Find Garlic and the Vampire in the catalog here! 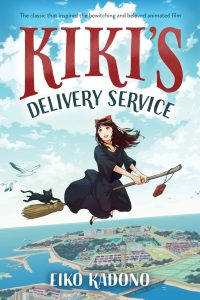 It is witch tradition that at thirteen a young witch leaves her home to find a town in need of magical services. Half-witch Kiki hasn’t fully mastered her magical abilities yet, but she also never runs from a challenge. Flying on her broomstick (one of the few magical things Kiki actually is pretty good at) with her black cat, Jiji, Kiki decides to stay one full year in the seaside town of Koriko. At first she’s met with some skepticism by the locals, but determined and lovable Kiki quickly finds her footing.

Kiki’s Delivery Service is a wholesome and warmhearted coming of age story. Originally published in 1985, it was later adapted into the animated movie of the same name by legendary director Hayao Miyazaki in 1989. The newest translation was published in 2020 with new beautiful new cover art and illustrations by Yuta Onoda. Families looking for a book to read aloud together will love its episodic chapters, but I wholeheartedly recommend Kiki’s Delivery Service to any witch in need of a cozy read. 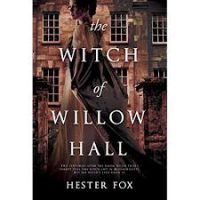